So what is a resonator and what does it do? In this article, we’ll break down the essential questions to understanding the resonators part in a vehicle’s exhaust system. So if you want to learn more, keep reading!

What Is a Resonator and What Does It Do?

When it comes to exhaust systems, the resonator is a device that’s used to cancel out certain sound frequencies before reaching the muffler. The resonator is typically located underneath your vehicle, essentially between the catalytic converter and the muffler.

It’s important to note that the exhaust resonator does not reduce the overall noise of the exhaust system by itself; it simply alters the sound by reducing or canceling out certain frequencies from the engine before it reaches the muffler for a final reduction.

In other words, you can say that the resonator prepares noises before they enter the muffler.

How Does a Resonator Work?

Engineers have designed the resonator to eliminate sounds at a particular frequency using space to make the resonator act like an echo chamber. As exhaust gases travel through the resonator, the soundwaves bounce off the inside of the device, canceling each other. But it doesn’t affect the volume.

Difference Between a Resonator And a Muffler

While both devices are essential in reducing exhaust noise, the reason a resonator is necessary is that a muffler cannot cancel out all the unwanted frequencies by itself. The resonator is a complement to the muffler and the exhaust system to ensure that your car runs as quietly as possible.

Does Every Car Have a Resonator?

No, but most cars have one. Modern vehicles will most likely have a resonator to reduce the exhaust noise, which contributes to a better noise level both inside the car and outside. Modified cars or older cars may not have a resonator because the owner may have removed it, or they didn’t exist when the vehicle was made.

How Do I Know if My Car Has a Resonator?

If you are still not sure, you can always consult a professional mechanic to take a look for you, often for free.

Does a Resonator Affect Performance?

An exhaust resonator is designed only to reduce exhaust noise. However, by removing the exhaust resonator, you might see a slight increase in performance because there is now less restriction on the exhaust system. This difference is usually very minimal and is not something that most people would notice.

If you’re looking to improve your car’s performance, there are other modifications you can make, such as installing a straight piping or a cold air intake. These modifications can improve exhaust flow and help increase horsepower.

Do I Need a Resonator On my Exhaust?

A resonator is not required on your exhaust system. However, most cars and exhaust systems come with a resonator because it’s an effective complement to the muffler to reduce exhaust noise. Without a resonator, your car might be significantly louder.

Although it may make your car significantly louder, performing a resonator delete or muffler delete is a popular modification by car enthusiasts. Especially when replacing the original exhaust with straight piping or cat-back exhaust.

However, there is a ongoing debate over whether or not removing the resonator and mufflers deletes are bad for the car.

No, exhaust resonators do not necessarily require maintenance. However, if you think that your resonator or exhaust system is not working as well as it should, it might be a good idea to jack up your car and take a look underneath it. If you’re unsure how to examine the exhaust, it’s best to let a mechanic have a look.

Oftentimes, exhaust system problems are caused by other parts of the system, such as the catalytic converter or the muffler, so it’s important to get your exhaust system checked out if you’re experiencing any issues.

Do I Need to Replace A damaged Resonator?

If you notice that your resonator is damaged or experiencing any issues, it’s important to get it replaced as soon as possible. A damaged or malfunctioning exhaust resonator can cause exhaust leaks and carbon monoxide to enter the cabin of your car, which can be dangerous and, in worst cases, deadly.

If it’s only your exhaust resonator that is damaged and need replacing, it’s not a very expensive repair. The cost to replace an entire exhaust system would be worse.

How Much Does it Cost to Replace a Resonator?

The cost of replacing a resonator will vary depending on the make and model of your car and if you’re doing it yourself or hiring a professional. In most cases, you can expect to pay between $100 and $400 for the parts and labor.

A resonator is a cylindrical device that is located in a car’s exhaust system, usually between the catalytic converter and the muffler. Its purpose is to reduce exhaust noise.

Most cars come with a resonator; however, they are not required. If your car does not have a resonator, it may be louder than usual.

You can usually tell if your car has a resonator by looking under the car. If you see a cylindrical device, it is most likely a resonator.

Exhaust resonators do not require maintenance and can last the lifetime of your car. If you do need to replace your resonator, it will cost between $100 and $400.

I hope this article was helpful! 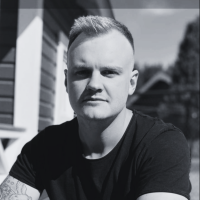